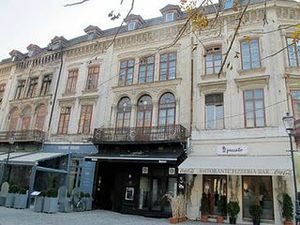 This beautiful house on str Franceza has suffered the greatest of humiliations - abuse to its interior, attacks to its facades, violence to its structure, and, most recently, two cases of arson. Who owns the land, one surely asks. The PMB.

For the history of this building, please see Silvia Colfescu's blog, 'Istorioare Bucurestene' for Casa Miron Vlasto Part 1 HERE. Knowing its past and its recent present makes what has happened to this house all the more repugnant. Doamna Colfescu has written several wonderful posts on the history of str Franceza, taking us on an adventure of discovery in a city that was once beautiful - a city of which one could once be proud - a city that, today, has fallen victim to greedy investors, ignorance, indecency and the real estate mafia.

Silvia Colfescu's most recent blogpost, Casa Miron Vlasto Part 2 - A Short Visit is the continuation of yet another example of houses currently weeping in Bucharest today, bludgeoned and maimed in the name of money in a world where pecuniary wealth and gain are worth more than heritage, history and architectural value. In translating it, apologies in advance for any injustice done to the original text, for this is a requiem to str Franceza, 30. Indeed, it is a requiem to all houses in the capital suffering from such criminal negligence and violations of legality and decency. All photographs featured in this post are the property of Silvia Colfescu.

Eclectic in style, with ornaments of neo-gothic origin and a neo-classic undertone, this form of architecture was fashionable in Bucharest the year the house was built (1872). With elements borrowed from French classical architecture, the national neo-romanian style was only to become widespread three decades later.

The building keeps the facade's decor which combines the expression of neo-classicism with neo-gothic detail, revealing intertwining harmony. Unfortunately, the majority of the neo-gothic ornaments around the windows and doors have been lost. One can see what remains of them around the main door which separates the corridor to one of the stairways and the interior courtyard. The balconies have retained their original railings, delicately worked in cast iron: The facade on str Tonitza still has its ornamental window grills dating from the XIXc: In one of the adjacent restaurants, one can still see the original metal columns which were part of the building's structural support.

With the exception of the spruced-up commercial space on the ground floor, the rest of the building is in a deplorable state. Rather than being restored, the door of the deteriorated main entrance has been lined with sheet metal: 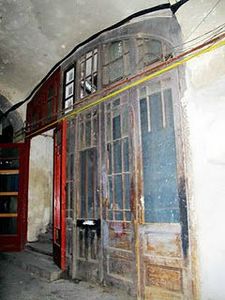 The toilets, clearly communal (except for those padlocked shut): The hallway on the first floor with a flood-damaged ceiling: The state of the Miron Vlasto house is identical to that of many other buildings in the old city centre. City Hall, the owner of the house (probably after nationalisation), allotted several spaces to tenants and other individuals who either opened restaurants or sub-let. Several years ago, the administration of the AFI (Administration of Real Estate Inventory) under City Hall who owns many of the buildings situated in the old city centre advised the tenants who were not able to buy that they (AFI) could no longer be responsible for the safety of the building and if they did not want to move, they would be staying at their own risk. Consequently, the tenants stopped paying rent even if they continued to pay their electricity, water and gas bills while others used wood for heating. The house was recently invaded by 'under-priveleged' characters content to live without water, heating and on 'borrowed' electricity.

Part of the utilities were cut following the first fire on 31st October which began on the first floor above the Bonne Bouche restaurant. The windows destroyed by fire were replaced with careless bits of graffiti'd cardboard: The 2nd fire started in the attic on 25th November. It claimed one victim and destroyed almost the entire roof: 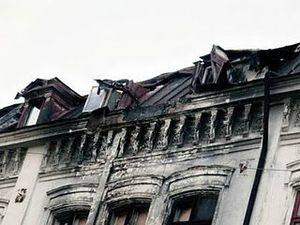 The adjacent restaurants are currently open and the tenants from the first and second floors are still there and bine mersi, in unsalubrious apartments: Those in the attic, some of them owners, are now living under a broken roof of carbonised beams: Within the house's sordid interior, the very ricketty staircase has lost almost all its cast iron bannisters but a few are still visible:

On the first floor, a few consoles remind us that, originally, the interior was beautifully decorated: In a dreadful state, the once-lovely stairwell skylight is broken and filthy: 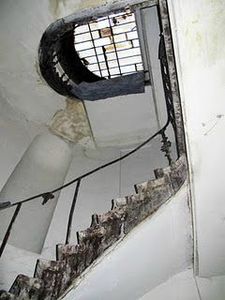 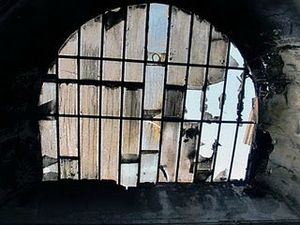 The back courtyard is a wasteland of trash: While the front of the building could still impress the eye with its harmony popular 140 years ago, the back, by contrast, suggests only devastation and neglect. Gas pipes and ventilation shafts from the kitchens are installed haphazardly on the walls: The same is true throughout the old city centre. If you look beyond the beguiling allure of restaurant windows, you will see the grey terror of misery from the above floors... yet again...