(Image source) When I woke up this morning I realised, rather surprised, that I'd never done a post on Rusalii. Excellent timing then, seeing as how I'm in the mood for some magic.

Rusalii is Romanian Pentecost/Whitsuntide and falls 50 days after Easter. We had our Pentecost ages ago (May 15th), but since Orthodox Easter was five weeks after ours this year, they're still catching up. Whit Sunday and Monday are national holidays here, so a longer weekend lies ahead for many - more than welcome considering the heatwave that has hit Romania over the last few days. 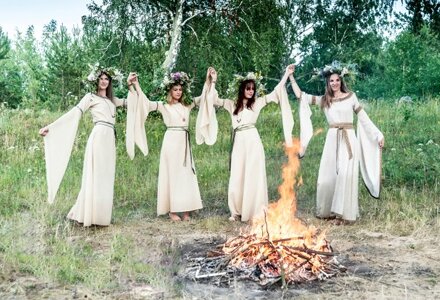 (Photo source) There are plenty of stories attached to Rusalii as you would expect in a country so rich in folklore. Rusaliile are magical creatures - fairies, actually - found in forests, mountains, near water and in the sky itself who visit this crazy world of ours over the course of this week (or for three weeks depending on the region). Legend has it they are the souls of dead girls who, having left their tombs on Maundy Thursday and spent Easter amongst the living, have flatly refused to return to the underworld preferring instead to hang around a while and torment those who disrespect the rituals of Pentecost. According to tradition, people once avoided calling them Rusalii to appease them, giving them different names instead: Iele (rather like the veela in Harry Potter) and Zane (fairy) and Frumoasele ('beauties'). They must, says folklore, be chased away at all costs.

One way to do this a little in advance is by giving generously to charity on Mosii de Vara (yesterday), a summer commemoration for the dead. Once Pentecost is upon us, however, wearing garlic and wormwood around one's waist is advisable. (Photo source) In the countryside, keeping the fairies at bay is done by way of dances - Calusarii - a ritual of healing and protection. Here are two from 1974 and 2004 performed by three generations of dancers. Do take a look for they are amongst the oldest traditional dances in Romania.

Back in days of yore, Calusarii, which date back to the Dacians, were danced uniquely by men bound to the group for 3, 5 or 9 years and forbidden any sexual activity during the ritual dance period. The ancient meanings have been lost over time, but folklorists and historians believe that the dance was either a fertility ritual or indeed an exorcism performed to cure the delirium and hypnotic trances caused by fairy possession which would eventually drive a person out of their mind. Such a disease, known as luat de Rusalii (taken by the fairies) can be triggered either by seeing them dancing naked in the moonlight or by inadvertently stepping on a spot where a dance has taken place. One can recognise these spots with a trained eye, for the grass is left burned following fairy presence, and once it grows back it is a darker green, left untouched by cattle and covered by a particular kind of mushroom known as Lingurita Zanei (Fairy Spoon). So now you know. Keep eyes peeled should you be in the countryside this weekend... (Photo source) It’s hard to say what calusar actually means, says RoUnite, although you may be interested to take a look at a few definitions derived from other beliefs:

The dance spread to Serbia and Bulgaria and also has similarities to our British Morris Dancing, suggesting that the Celts rather liked it, borrowed it from the Dacians and took it home westwards. Originating in the south (Oltenia), other variants may be found in Moldova, Maramures and Transylvania. (Photo source) Apart from Calusarii there are other superstitions linked to this festival, says Romania Journal. Knowing them will help you take some precautions to protect yourself from fairies up to no good:

I have to work tomorrow, Whit Monday, so I hope that won't upset any fairies. If you do too, we'd better stuff our belts and/or pockets with garlic and wormwood just in case.

In the meantime, Bucharest is heaving with events for Pentecost from open air jazz and classical music concerts to exhibitions, picnics and fairs, see HERE.

For more on Rusalii, please see HERE in English and HERE in Romanian.

IMPORTANT POST SCRIPT: Anyone concerned by the prospect of possible altercations between Rusaliile and Sanzienele on Thursday night (Noaptea de Sanziene) due to a collision of these two mystic festivals, fear not. It seems they met three years ago when the very same thing happened and signed a peace treaty which still holds today. Thank you to Rocky's Dad for the comforting info - it was rather a worrying prospect.