Welcome to the House of the People - and don't come back!

Welcome to the House of the People - and don't come back! 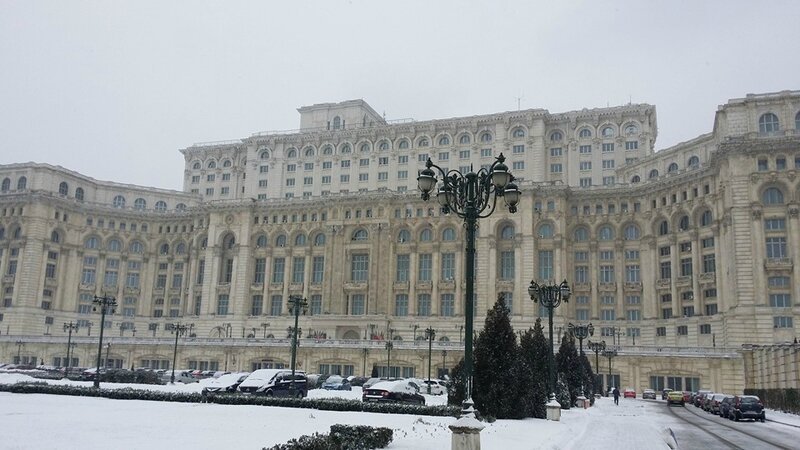 Last week, one of my closest friends (S.) came to Bucharest for New Year. It was her first visit so I really wanted her to feel the charm of this marvellous, vibrant city. We sped about all over the place taking in museums, galleries, churches, monasteries and two wonderful days in Brasov.

Towards the end of a lovely busy week, S. decided she'd like to go on a tour of Casa Poporului ("well, you've got to haven't you. Can't be in Bucharest and not see that."), so having found nothing helpful on the site (bravo) we called to enquire about times, reserve a place on a tour and thus done, set off that same morning. According to the voice on the phone, S. needed her ID, the tour in English would begin at 10h45 and last 90 minutes and there'd be a visit to the underground nuclear bunker. "Ooooh!" said S. The night before it had snowed hard, and Bucharest was something of an icerink in the making. The taxi dropped us off at the Izvor entrance a good way from the building itself - taxis can't get any closer. We crunched and slid along to the front of the hugely imposing eyesore gingerly negotiating the stone slabs that run alongside to the entrance doors. No sand, no salt, just a load of people-friendly ice. A nice tourist (Italian?) saw the two of us clinging to each other like a pair of old dears and helped us along. Thank you, kind tourist, whoever you were.

Once inside (God, what a foreboding place it is), we went to an info centre to the right where a lady sat behind a white cardboard-like counter similar to those you find at fairs. She checked the list for S's name and ticked her off. I didn't join the tour due to my overwhelmingly deep aversion to the place. Just one ticket please. The info lady filled in a slip of paper which involved ticking several boxes whilst looking important, and then waved us to a small dusty shop the other side of the hall evidently stuck in a 70s time warp. "What now?" I wondered. "We pay there, I spose," said S, who having lived two years in Moscow seemed more with it than I was. The bored girl at the counter took the slip of paper with the ticked boxes and said "60 lei" in a none too friendly tone. Jobs worth. 60 lei exchanged hands. No "thank you", no "enjoy your tour". Happy New Year to you too.

Unsurprising for the first week of the year, people were still on holiday and tourism was booming. Around us, UK/US English, French, Italian, Spanish, Hebrew. Visitors queued in droves on that freezing, snowed up morning. An American nearby was flicking through Rick Steves for some pre-tour input on life in Romania under communism. What better place to come, you'd think.

A young guy (Scandinavian?) was at the info counter asking if he could pay by credit card. No. Cash only. "But I have no local money. Can I pay in foreign currency?" No. "Is there an ATM here?" Vague shrug translating roughly into 'not my problem'. Excellent customer service. Later, S. said there was an ATM but on the other side of the barrier and up the stairs. Useless if you need cash to pay the entrance fee since without your ticket, you can't get through the barrier. Here we are in 2016 and credit cards cannot be used in the famous House of the People ("second largest building in the world next to the Pentagon, you know"). In what decade are we exactly? 10h45 came and went. At 11h, a voice called for those wanting the English tour. Stampede. Once S. had gone through the barrier (xray security and tralala) and waited a further 20 minutes on the steps beyond for everyone else to be checked, I went back to the info lady to see if the modern art museum was open. Nope. Neither was the café above it and no, there were no exhibitions currently running. If I wanted the contemporary art wing, I'd have to go around the outside of the building to the front. On the unsalted icerink. No thanks. An excellent example of optimising Bucharest during the holiday season. Well done, authorities.

The entrance hall had a commie-style make-do bar (no seats, just the bar see above left) where I got a coffee and then took root in a bright green chair by the door to people-watch the 90 minutes away. No wifi. Don't be daft. At least there were chairs. After a while, I decided to explore any books to be had in the gloomy shop. With no room to swing so much as a flea in there, I squeezed my way past four people (German) getting tickets for a later tour, and browsed a little to kill time. Didn't take long. Mugs of Dracula, wooden masks, Romanian blouses at 521 (yes, ONE!) lei a shot, plastic dolls in national costumes that needed a wash, calendars (2016 - well done), magnets, keyrings. Books? Another stupid idea. Some on Romania (a few quite dog-eared), two illustrated books of Casa Poporului that analysed the "impressive architecture" but nothing much else, and a bunch of guidebooks from publications I'd never heard of. Nothing historical, no novels. No effort to cater to an interested or curious public. Back to my seat. People queueing, wondering where to pay, a traffic jam for those trying to get into the cramped shop while others waited for friends and family already on tours. Half an hour later, I just happened to turn to my left and... there was S. sitting on an identical green chair trying to text me. "Hey! How come you're out so soon? Didn't you like it?" She shrugged. "It started late and finished early." A 50 minute tour for the price of 90 minutes.

"Did you take lots of photos?" I asked. "Yes, and so did everyone else whether they'd paid the photo tax or not. I had to wear an extra sticker to say I'd paid mine but there were people snapping away who hadn't. What a rip off."

A rip off indeed. 50 minutes instead of 90 and an unnecessary photo tax that's a con anyway. A nice way to fleece tourists.

What had she learned from the tour? Anything interesting? Not much except for the number of lightbulbs in the chandeliers and the weights of the afore-mentioned, the height of the windows, the length of the curtains and when they'd last been washed, the number of artisans from all over the country who worked on the site and how BIG, how EXPENSIVE, how IMPRESSIVE and how GLORIOUS it all was. Seriously? How about Ceaușima? The destruction of an entire third of the city? 7km to be exact. The 27 orthodox and 3 protestant churches, 6 synagogues, Vacaresti monastery, the entire district of Uranus, the tens of thousands of homes? The suffering of the population who went cold and hungry for such madness? The terror of so many working there that the Ceausescus would be displeased with results? The appalling working conditions? Nope. Oh wait, yes. Demolition was mentioned in passing, but the only statistics were concerning the nit-picking details leading to the 'greatness' of the building, not the heinous suffrance it wrought. Hallucinating. Disgusting. What about the nuclear bunker? "Oh, that," she said. "If you mean a few pipes in the basement... Didn't see a bunker."

So, to recap: A 90 minute tour that took 50 minutes; a photo tax that was nothing more than a way to squeeze yet more money out of foreigners; the famous bunker visit that didn't happen and an agitprop guide.

Did anyone ask questions, I wanted to know. "Yes," said S. "Some. They wanted to know the weight of this and that, the materials used, etc." I almost regretted not going on the tour too so I could at least have yelled about one of the largest peacetime urban destructions at the hands of humans in recorded history. The bombings on Bucharest and the 1977 earthquake together caused only 18% of the damage produced by Ceausescu's demolition frenzy campaign in the 1980s.

How a serious tour guide of a monument symbolic of mutilation and misery could possibly brush these facts under the carpet and wax lyrical on the glorious size, the dazzling chandeliers, luxurious carpets, number of bloody lightbulbs, etc is deplorable. Pure nauseating propaganda blurb. A MISguided tour from beginning to end.

In addition, S. had her passport WITHHELD until she'd finished the tour. Of course it's normal to demand ID on entering such a place. Tourists would of course show their passports. But to confiscate them? No entering of name, address, passport number into a computer like anywhere else, and then returning it to its owner? In 2016? Too much effort, too sensible or is it just to intimidate further, adding to the general coldness and oppression already reigning in that sinister place? It is a breach of international law and is simply outrageous that they get away with it. No one has the right to confiscate such a document, except for the government who issued it or if a crime has been committed.

For S. it was a disappointing waste of money. Friends of mine here apologised profusely for the lousy experience although it wasn't their fault. "Yes," contradicted one. "It is entirely our fault that after 26 years this STILL goes on." She has a point. Shame, shame and shame again. If authorities in Bucharest want tourists (or rather, tourists' MONEY), they're going to have to respect them, treat them properly, abide by international laws and clean up their act. After such blatant lack of consideration (and this is not an isolated case) along with the scandalous abuse of truth on what should have been an educative tour, who would ever want to return? It seems that after 26 years, along with the make-shift coffee bar, the sulky 'nu se poate' staff and the dingy little shop in the unappealing entrance hall, mentality indeed hasn't changed a jot.

Photos by Sarah in Romania and SH.