I tumbled into R.G. Waldeck's Athene Palace yesterday and boy, is it a trove of history, first-hand gossip and addictive scandal in fabulous detail. I was no stranger to King Carol II's disastrous ruling nor the shameless disgrace of Elena Lupescu, but the career of unscrupulous leach Ernest Urdareanu (1897-1985), the true meteoric ascendance of an eminence grise, came as a staggering revelation.

Pour yourself a nice festive drink, then sit back for a story that will whisk you back to late 1930s Bucharest - another world, or so I thought. Turns out it wasn't that different from today's Bucharest after all, for opportunists and Rasputin-type power-snafflers have existed since time immemorial, all out to rob Romania and her population for their own self-enrichment. Because they can.

Astonishing really. Almost out of nowhere, Ernest Urdareanu became King Carol II's minister of the court, chamberlain, closest advisor and the third branch of Romania's ruling Trinity with the King and Lupescu. After King Carol II himself, Urdareanu emerged as the most powerful AND the most hated man in all Romania. And with cause.

Nobody seems to know much about Urdareanu's early years, but Wikipedia says he had two brothers and came from a military family. In 1931, he arrived at the Palace as an aide recommended by Nicolae Titulescu, and became head of the Palace garage (he had a great passion for cars and was a former racing driver) where he was a regular chauffeur for Lupescu. Appointed private secretary in 1933 and vice-marshal in 1936, the star was truly launched a year later when he became head of the royal household. 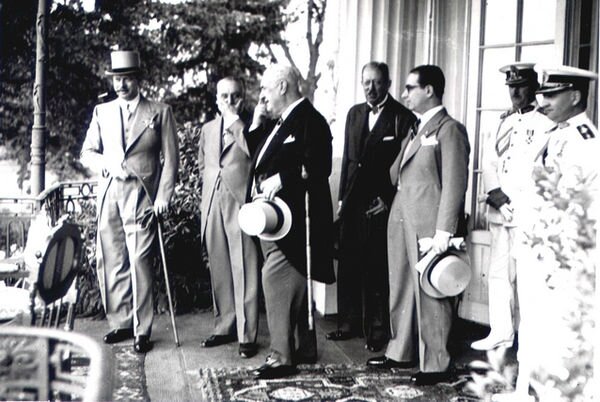 Urdareanu was not promoted on merit, experience or qualification but on the boundless trust bestowed upon him by Carol II and Lupescu. The power he gleaned was hallucinating, and how it could possibly have happened had many a Bucharestean scratching his head from 1936 onwards.

According to Waldeck in Athene Palace (University Chicago Press, 2013, p24/5), many 'fantastic stories' buzzed frenetically around the capital. The most fantastic perhaps was that the King had married Lupescu off to Urdareanu. Many say the two were lovers and it has never been disproved. Whatever, impossible though it was to ascertain how this man's career had soared so extraordinarily, one thing was sure and certain: It was Lupescu who had taken him from the garage and popped him into the Palace. (Photo source - Ernest Urdareanu) Carol II was a blabbermouth. He talked too much, too freely and to everybody. On more than one occasion, he even talked about Lupescu and she was most displeased. It seems that she put Urdareanu in his valuable, powerful position to keep a gossipy king in check and thus cover the throne in some wondrous veil of secrecy that would emanate an air of mystery befitting royalty as well as minimising further chitchat focusing on her.

The upshot was that Urdareanu became the singular most important influence over Carol II's reign.

Urdareanu lorded it over the camarilla (circle of shady but powerful favourites including wealthy industrialists Auschnitt and Malaxa, Aristide Blank, Mihail Manoilescu around the King all of whom loathed Urdareanu) too, along with Lupescu. Although Carol II may have created his lavish personality cult which grew more extreme as his reign progressed, Urdareanu controlled it - and everything else:

(Waldeck, p25) 'Prime Ministers and cabinets came and went often, but Ernest Urdareanu was always there, firmly between the King and the outside world. No letters or telephone calls reached the King unless approved by Urdareanu. The King received in audience only persons whom Urdareanu approved, and even these were received in Urdareanu's presence. Even His British Majesty's minister, ponderous Sir Reginald Hoare, and the Fuhrer's stiff and polite envoy, Dr Fabrizius, had to count heavily on the good will of the all-powerful court minister.'

Rumour had it (and it's not hard to believe) that anyone who wanted to see the King had to grease Urdareanu's palm first. He is quoted to have boasted, "Madame Lupescu controls the King, but I control Madame Lupescu so I control Romania." (Moats, 1955) As the King's right-hand man, Urdareanu had seats on the boards of a myriad of companies in which Carol II had financial interests. It is generally believed that Urdareanu helped the King transfer large sums of money out of the country into foreign banks, and did not neglect his own financial benefit in the process.

Waldeck describes (p25) Urdareanu as a swarthy little man of 'flashy elegance with a silver plate in his skull who was said to use powder and rouge.' Every day he had lunch at Lupescu's house - they were neighbours. Young Prince Michael detested him and 'behind his father's back called him Murdareanu which was Romanian for dirt.' Astute child.

Everyone knew he was corrupt to the very bones, and the huge wealth he amassed in only a few years was proof of the pudding. Waldeck writes (p25/6), 'Rumour had it that the great European powers, including Germany and England, paid large sums to the King's favourite. All this if true, would be in the best tradition of the Balkans.

But even Urdareanu's bitterest enemies admitted that he adored the King and was completely loyal. They even admitted that Urdareanu advised Carol according to the best of his knowledge as to what was best for the King. What his enemies resented was that this 'best knowledge'  was a primitive kind of unscrupulous shrewdness, and that what Urdareanu thought was the best interest of Carol was rarely the best interest of Romania.'

Fast forward to 1940 (see HERE for more on Carol II's abdication): When King Carol II fled Romania with Elena Lupescu and hundreds of pieces of luggage, among them priceless paintings such as several El Grecos which some say actually belonged to the state, along with other treasures, Urdareanu was right there with them. Naturally. It sounds rather like a madcap adventure for teens off inter-railing for the summer. Wikipedia explains: 'When King Carol and Madame Lupescu were forced to leave the country after the King's abdication on 6 September 1940, Urdareanu accompanied them on their adventurous flight from the country, when the royal train was hounded and shot at by members of the Fascist Iron Guard. First they went to Switzerland and afterwards to Spain, where they stayed in Barcelona, Madrid and Seville. Due to constant pressure from the German and Romanian government for the extradition of Lupescu and Urdareanu on account of their suspected crimes and corruption,[5] in March 1941 Urdareanu organised their flight to Portugal.'

They weren't in Portugal long. Fearing German occupation would spill in to Portugal, the three preferred to seek asylum in Cuba, Mexico and Brazil. In Mexico, Urdareanu married 18-year-old Monique Cook (happy to give many an interview on her marriage, adventures and opinions of Carol II and Lupescu over the following years, see HERE for example) and, in 1947, organised Carol II's and Lupescu's marriage in Brazil.

'In 1949 all four returned to Portugal, where they set up a household in Estoril, with Urdareanu still as secretary and chamberlain of the King. After the unexpected death of King Carol in 1953, Urdareanu organized the funeral in Lisbon,[5] which was not attended by ex King Michael, partly because the latter didn’t want to meet Lupescu and Urdareanu [how perfectly understandable - Sarah's note]. Michael detested Urdareanu.

After King Carol II's death [untimely at 59 years old - Sarah's note], Urdareanu and his wife stayed with Madame Lupescu until her death in 1977. Urdareanu later died in Portugal in 1985, at the age of 88, never returning to Romania.' Of course he didn't return to Romania. He'd have been immediately arrested and thrown in jail.

So that's that. That's the story. Except it isn't a story. This slippery, sly and pretty darn ruthless bloodsucker from seemingly nowhere swung from royal chauffeur to perhaps the lover of the King's mistress (Downton Abbey much?) and became the most powerful man in Romania besides the King himself. At the moment of abdication, this (by now wondrously rich) freeloader ran off with King and Vamp for a wild extended holiday in Europe and Latin America on money nicked from the Romanian population, and went on to live out his days bine mersi in lovely Estoril finally snuffing it at the ripe old age of 88 having never answered for a single crime.

Other books in English on this period in Bucharest: Foreign Correspondent by Robert St John; The Balkan Trilogy by Olivia Manning