50km from the city of Brașov at the foot of the Făgăraș Mountains lies a cave so steeped in mystery and strange phenomena that it is rather difficult to describe. The Rupestral Monastery of Șinca Veche (or The Temple of Șinca Veche), also known as 'The Temple of Fulfillment', 'The Temple of Wishes', 'The Temple of Fate', 'The Cave Monastery' or just plain 'Grotto', is a national monument and, on this very spot, the Divine Liturgy was served for almost a quarter of a millennium. Why so many names? Well, because nobody really knows when the cave was actually sculpted and transformed into a place of worship, nor what the underground rooms were for. Enigmata all the way.

It is probable that the cave of sandstone was formed naturally by erosion caused by mountain springs. For sure, the snail-like spiral visible around the inside of the 10-meter 'tower' (below left) would be testimony to that. 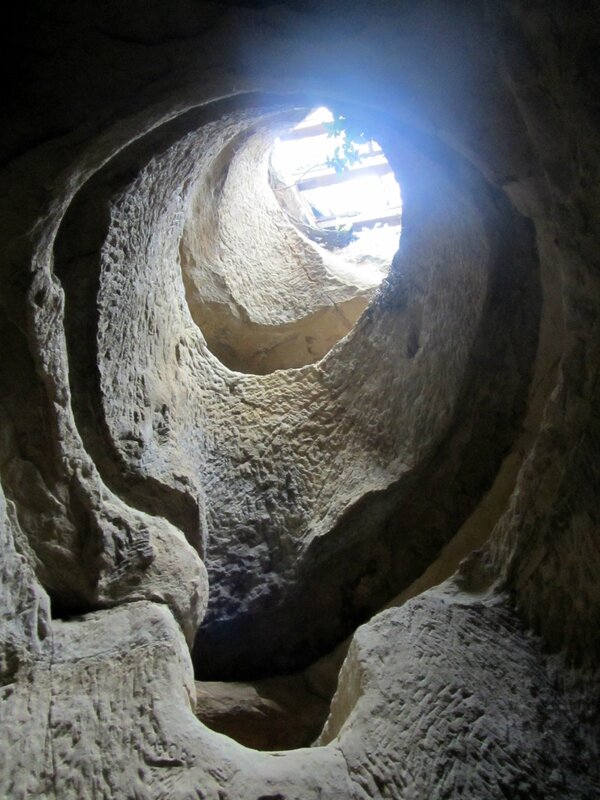 Its age has been estimated at more than 7,000 years with even earlier Dacian origins. One of the arguments defending this is the presence of two altars, which can only mean that it is not of Christian origin. Historians say that, in this respect, it is utterly unique. Along with these, the cave also consists of 9 rooms with curious sculptures and shrines. Small, repetitive indentations in the wall give the feeling of a vast and indefinite space, whilst natural light comes in through the entrance and the 'tower' (left) that opens upwards, connecting with the surface allowing the sun to filter down onto the main altar below. Legend has it that this 'tower' serves as a pathway for supernatural energy to flow in and out. Dim though it is, there is enough light with the additional candles to contemplate a natural simplicity of indescribable beauty.

Since Șinca Veche is located at the border with what was once the Habsburg Empire, an amalgam of different religions and communities sheltered within these walls at various times, not least monks hiding from Austrian Empress Maria Teresa out to convert them to unthinkable Catholicism. The conditions they must have lived holed up there for perhaps years on end, the cold, the dark, don't bear thinking about... (Photo source) The walls are covered with drawings, many of which archaeologists have been unable to explain. Dating them is equally impossible. Amongst them, though, are more familiar signs and symbols including a Star of David above the second, least visible altar. Within it, a Ying and Yang (or perhaps it's two fish?), leading researchers to believe it dates from the pre-Dacian period. The face and shoulders of a man (see below left) perhaps portrays the image of a Dacian... Oddly (as if things aren't odd enough), apart from the altars, there are no Christian crosses to be found in these rooms despite the lengthy presence of the aforementioned monks on more than one occasion. "Strange energy" and "special place" are expressions used by those who have stepped inside to seek rest and solace here. On the eve of religious holidays, locals report that celestial choirs can be heard, whilst legend says the temple site is a gateway to other universes, where ancients communicated with the "upper world" or beings from parallel dimensions. There are stories of healing, dreams coming true after praying here and non-existent lights and shadows appearing on photographs. It is indeed a most mysterious place that sends your imagination running wild.

All secular or religious settlements are generally found near water sources and at Șinca Veche, as one walks through the woods around the cave, a spring babbles merrily amongst the stones that has been sanctified hundreds and hundreds of times further strengthening the belief of healing waters.

The locals speak of a tunnel at the bottom of the cave linking Șinca Veche to the citadel of Râșnov. There are several people primarily instrumental for this incredible though slightly spooky place of worship found today in Șinca Veche. Maria Bagiu, an epidemiologist from Brasov, established the Orthodox-Cultural Foundation when she retired in 2004. She discovered the cave  (also in 2004) in a pitiful state of degradation, and managed to get on the good side of local authorities, forming an agreement with the Șinca Veche Townhall who agreed to lease the land to the foundation. It is this foundation that runs what you see today. Be that as it may, not everyone is in awe of Dna Bagiu. There have sadly been reports that monks who used to take care of the temple have been thrown out (see comments section of hyperlink) and that Dna Bagiu herself has become some kind of local religious leader. I'll let you draw your own conclusions....

Brasov County Council has since rebuilt the road from the village to the grotto and geotechnical and geophysical surveys of the site were carried out in 2005. The construction of the roof to protect the grotto from the elements and any further damage was conducted by Serban Sturdza, President of OAR (The Order of Romanian Architects). Work continues to preserve this marvellous place for generations to come. Nearby, St Nectarie, a small, traditional monastery classified A on the list of historic monuments sits on top of the hill with views that made me wonder how anyone can possibly discount the existence of God. Built in stone and wood and run by nuns (and a few monks too if I have understood correctly), it is filled with a myriad of abundant flowers. As the toaca sounded announcing Liturgy, I was transported to another time and place, entirely at peace with the world. Photos by Sarah in Romania unless otherwise stated. Please ask before borrowing and/or hyperlink back to this post. Thank you!