Turning back the clocks with Sanda Marin

Turning back the clocks with Sanda Marin (Photo source - 1936, 2nd edition) The cookery book, in an advanced stage of tatters (though cunningly held together with wrapping paper, paper clips and willpower), sits on the work surface in the kitchen ready for action. Its discoloured pages have seen a lot of the world and witnessed much of life. Full of scrawled notes in the margins dating back decades, the countless jottings on bits of coloured paper pinned to corresponding recipes are a reminder of what to do and what not to do next time. Today, chiftele is on the menu and Sanda Marin is needed to be sure nothing has been left to chance.

Anyone who knows their way even remotely around a Romanian kitchen will have heard of Sanda Marin, Romania's own interbellum version of our Mrs Beeton. She is an authority; indispensable, a national symbol of homeliness and since 1936, every Romanian household has had a copy of her Carte de Bucate in the kitchen, or at least on a shelf somewhere. In a word, Sanda Marin was and is the Romanian JOY of cooking.

"When I was a child," said Andrei Pleşu, "we thought Sanda Marin was one word - 'sandamarinul' - a useful tool with the answer to everything." (Photo source) Sanda Marin, born Cecilia Maria Simionescu (1900-1961), grew up in Iasi amongst a family of prominent intellectuals. Her father Ion Simionescu, a reknowned paleontologist, was president of the Romanian Academy.

Cecilia went to the best schools and benefited from excellent professors, amongst them Florica Musicescu (Dinu Lipatti's teacher) with whom she studied piano in Paris. She spoke fluent German, French and English and rubbed shoulders with the intellectual elite of the interwar period who visited her home. Cecilia was an avid listener and adored their discussions which were usually full of passion and controversy given the time.

Following her marriage to doctor in chemistry Mihai Zapan, she transformed her home into a gastronomic nirvana in which she prepared mouth-watering, divine creations for her family and friends. 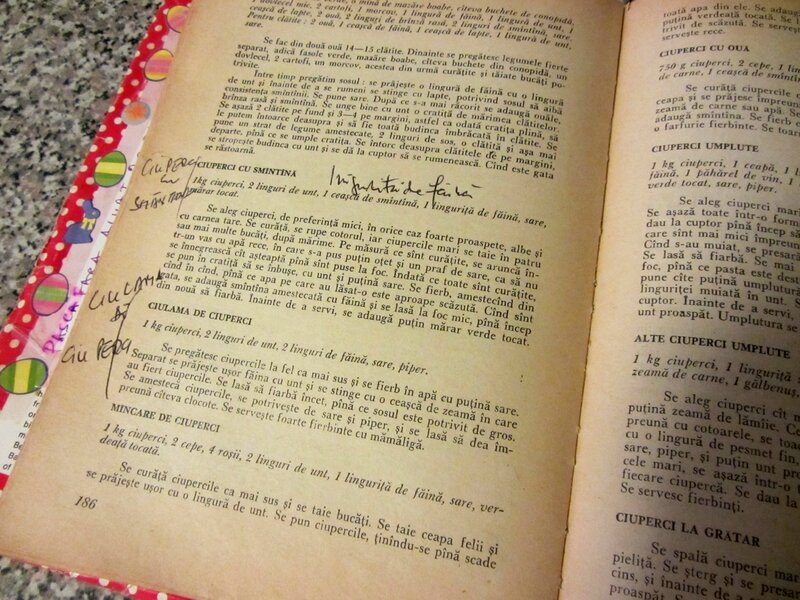 (Photo: Sarah in Romania) Uninspired by the Romanian cookery books available on the market at the time, Cecilia decided to share her talent and show that cooking could be an art. Unsure of her success, she took a pseudonym: Sanda Marin. Published in 1936 it quickly became a bestseller and the most comprehensive collection of traditional Romanian recipes in the country. Published by Cartea Românească, the preface was written by Păstorel Teodoreanu and contained 1000 recipes.

Sanda Marin's Carte de Bucate in its many editions is a history book in itself. A written testament to the changes communism brought the Romanian people in terms of food shortage, her recipes suffered due to censorship and rationing. After 1945, the 7th edition republished by Editura Tehnică showed vastly reduced ingredients often replaced with something else - what was required was no longer available, and Sanda Marin's introductions had far less charm for the reader. (Photo: Sarah in Romania) In 1954, the volume was reprinted and much-shortened. What had become 1,300 recipes since the first publication in 1936 was slashed to 850. Anything considered too 'opulent', 'exotic' or 'cosmopolitan' was omitted: caviar (icre negre) salad, Chateaubriand and consommé all disappeared. Foreign names were changed. Tarte Napoléon became tortul marmorat (marble cake). Sauce hollandaise became sos cu unt (butter sauce), béchamel was modified to sos de faina (flour sauce), and béarnaise was given the boot completely along with anything that had a religious connotation or connection. Recipes for post (dishes for Orthodox Lent without meat/dairy) were removed but found in preparations considered 'economic'. One can actually follow the increased limitations for the pantry and the need to be very frugal through the ingredients of Sanda Marin's recipes.

Everything published after Sanda Marin's death in 1961 was done by Roda Vişinescu, a dietician, who updated and revised the author's recipes to reflect changing 'economic' conditions.

Ceausescu always said that Romanians ate too much. In the 70s, he planned huge soup kitchens for Bucharest to feed the population with meals to take home at low cost in superposed metal containers (sufertase) much like billycans. Remember the Circurile foamei? How ironic to construct such massive buildings for the selling of meals to the population of a sector when everything was so scarce - agricultural produce was all being exported to pay the country's external debt. There was only one choice of dish per day. Bucharest City Mall and Plaza Romania were all buildings initially destined for this project but unfinished at the time of the lovilutie. Another is now a university (D. Cantemir in Timpul Noi). Ceausescu was particularly interested in the one at Sf. Vineri, and followed its progress carefully. Built to accommodate thousands at a time in huge halls, he called it a 'fabrica de mancare', ie. food factory. Page 13 of our battered 1969 edition reminded me of this, although it was printed years earlier when things were a lot better. The text reads (translated from Romanian):

(Photo: Sarah in Romania) 'In our country, the diversity of products is becoming ever richer. The choice is so great that one faces a dilema as to what to cook for a balanced diet.' This was somewhat true in 1969 if not a little exaggerated. Such 'diversity' wouldn't last, though.

Page 13 continues: 'The daily ration should bring you at least the quantities indicated above (there's a chart - Sarah's note). For example, the amount of meat can be occasionally increased, but on that day, don't drink milk. If you don't have 100g of meat, you can do just as well with 50g of dried beans and 2 eggs.' In other words, 100g of meat can be substituted with 50g of dried beans and 2 eggs... If this could be suggested in a 'good' period like 1969, imagine how dire things got in the 80's. (Photo: Sarah in Romania) Before 1945, one finds recipes that ask for 'a fat, plucked chicken'. Later, post-'45, the same recipe begins with 'take half a chicken', and there's no mention of 'fat'. Times reflected in a list of ingredients...

The recipe for Chiftele ca de piept de pasare (meatballs with chicken breast) is not prepared with piept de pasare at all. 5 eggs, 1 onion, 1 slice of bread, 1 potato, 1 tbsp flour, salt, pepper, parsley, 2tbsp lard and 1 tbsp breadcrumbs, but no chicken. In fact, no meat at all. The meat is substituted by the potato.

Names like icre imitate, pateu imitat and mititei altfel break your heart although I'm told by MP (thank you!) that such recipes were nothing new. In Sanda Marin's various editions from the fifties onwards, onions are a main ingredient for almost every savoury recipe. For Salata de icre imitate one requires: 1.5 cups of water, 4tbsp grits, 1tbsp fishpaste (like anchovy paste - Sarah's note), half tsp cayenne pepper, 100g olive oil, 1tsp vinegar or lemon if you have it, 1 medium onion. From icre to fishpaste... (Photo: Sarah in Romania) In our 1969 edition, water features often as a substitute for unavailable ingredients: 'If you don't have cream, add water', 'if you don't have milk, add water'. Making do. One is asked to use a conopida frumoasa - vocabulary for a gospodina. There were no 'lovely' cauliflowers. At the market, most peasants wouldn't allow you to choose your vegetables ("nu-i la alegere, doamna!") and you got what you were given.

How about a slice of tort de fasole (string-bean cake)? Does it tempt you? Can anyone seriously imagine serving a string-bean cake at a birthday party? Portocale (oranges) are mentioned in our 1969 edition, but there were none available except for on New Year's Eve.

A complete and restored edition of Sanda Marin's cookbook was finally published by Humanitas in 2009, and it can also be found in English. I don't want a new edition though. Our yellowed pages, dog-eared and tired, recapture voices from around a table, chatter from a long-lost kitchen whereby, if you didn't have milk or eggs, you'd use water. The profound changes that took place in Romanian society as a result of food shortages particularly in the '50s, followed by relative abundance throughout the '60s and '70s are illustrated through the ingredients and commentaries of this culinary bible. Has anyone seen an edition published between 1980-1996? I haven't, but then again, who'd have needed a cookery book when there wasn't much to cook.

Indeed, so much more than a pile of traditional recipes... 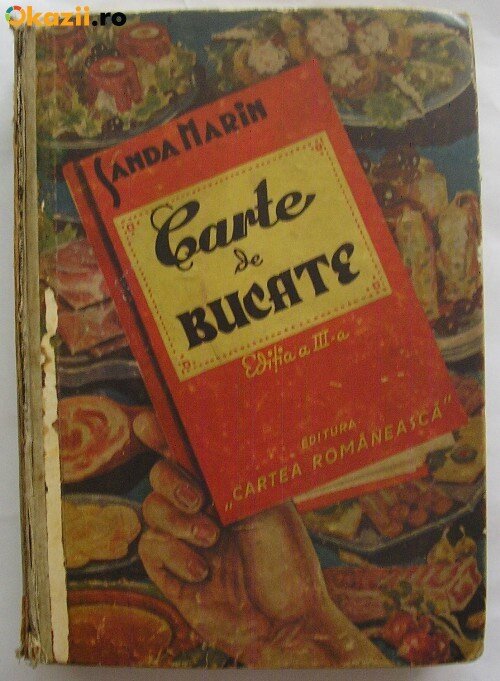