(Photo source) April 1st 2013 marks 72 years since the Fantana Alba massacre in Northern Bucovina near the village of Fantana Alba, today in the Ukraine. Between 200 and 2,000 civilians were killed when their attempt to cross the border from the Soviet Union to Romania was met with open fire by Soviet border troops. Although according to some data no more than 48 civilians were killed, local witnesses assert a much higher toll of 2-3,000, claiming that survivors were tortured, killed, or buried in mass graves. Other survivors were allegedly taken away to be tortured and killed at the hands of the infamous NKVD. However many it was, one was too many. It was, in effect, Romania's Katyn.

'In June 1940, Romania was forced to withdraw from territory inhabited by some 3.76 million, submitting to an ultimatum given by the Soviet Union. The Romanian administration and military were evacuated, and the Red Army and NKVD quickly occupied the land. The rapid unfolding of events caught many families by surprise, especially those who had relatives on both sides of the new border. This lead to attempts to cross with or without official permission.

From the more remote areas of the Chernivtsi Oblast (the northern portion of acquired territories included in the USSR) - Cernăuţi in Romanian, 628 people from a myriad of ethnic and social groups crossed the border to find refuge in Romania - one Ukrainean scholar estimated the number of refugees flooding into Romania during the first year of Soviet administration to be at 7,000.

The Soviet authorities were not amused and reacted swiftly: First, border patrol efforts were intensified and then, lists were made of families with one or more 'deserters' who had fled to Romania, thus considered "traitors of the Motherland" and subject to labour camp deportation. On January 1, 1941, the lists made by the 97th Unit of the Soviet Border Guards noted 1,085 people. Tables for other localities featured 1,294 (December 7, 1940). At this point, even people merely suspected of intending to flee to Romania were included. 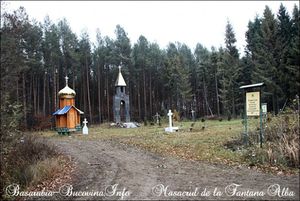 (Photo source) On 19th November 1940, 40 families (105 people) from Suceveni village with 20 guns between them tried to cross the frontier at Fântâna Albă. That night, a battle ensued with Soviet border guards in which 3 people were killed, 2 wounded and captured by the Soviets while the rest of the group (including 5 wounded) succeeded in getting to Rădăuţi on the other side of the border. The relatives of these 105 were all arrested and deported to Siberia.

On Easter Day, 1st April 1941, a peaceful but huge crowd of unarmed people from several villages carrying a white flag and religious symbols walked together as one towards the new Soviet-Romanian border. There were rumours circulating that the Soviets would now permit crossing into Romania. At the border, they were warned by Soviet troops to stop. The group apparently ignored the warning and the border guards opened fire....'

The exact death toll remains a matter of controversy. Eyewitnesses estimate that around 200 people were killed directly by gunfire and many more wounded. Those who died outright seem to have been the luckier ones. Some of the surviving wounded were allegedly captured, tied to horses and dragged by their feet to previously dug common graves where they were killed, beaten with shovels or buried alive. Others were brought to the Hlyboka NKVD headquarters where they were tortured to death, while more were taken after torture to the city's Jewish cemetery and thrown alive into a common grave over which quicklime was poured. 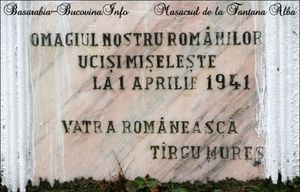 (Photo source) An account of events is given by one of the few surviving eyewitnesses Gheorghe Mihailiuc in his book, "Dincolo de cuvintele rostite" (Beyond spoken words), published in 2004 by Vivacitas in Hlyboka. He describes what happened at Fântâna Albă as a "massacre", a "genocide", a "slaughter". He's not wrong there.

There is discussion as to whether or not the Soviet border guards warned the column of people to stop before opening fire. Some sources say that the Soviets summoned the column to halt, but that a flag-bearer at the front reassured the crowd that the guards were forbidden to open fire upon groups of over 20. So much for that. Seconds later, machine gun fire hit the group of unarmed civilians at full force.

'During 1940-1941, between 12-13,000 Bucovinians (mostly, but not all ethnic Romanians) were deported to Siberia and the Gulag. As a result of emigration and killings, the Romanian population of the Chernivtsi region dropped by more than 75,000 between the Romanian 1930 census and the first Soviet census of 1959. It has been claimed that these persecutions were part of a programme of deliberate extermination, planned and executed by the Soviet regime.'  (Text: edited from Wikipedia)

I knew nothing of this terrible page in Romania's history. For more on the Fantana Alba massacre if you can bear it, please see Ziaristi Online, Basarabia-Bucovina Info, ...fantana, Nasul.tv (text and video), Frontpress, FTR.ro, Moldova.org, Magazin Cultural Stiintific and Timpul MD. Also take a look at Cotidianul (April 2010) and a letter to the press both by Roxana Dascalu (Reuters).

Why Romanian officials have neither acknowledged nor condemned the massacre at Fantana Alba and thus journalists also remain pretty schtum on the subject (you will see that most of the hyperlinks above are blogs and sites rather than Romanian press) is a mystery to me. Perhaps they don't want to cheese off the Russians. When one imagines the horror back then on the Easter Day of 1941, I'd say that upsetting the Russians would be a small price to pay to honour one's own dead. Wouldn't you?

Post script: It appears that back in 2011, a law was adopted by the Romanian Parliament's Chamber of Deputies (initiated by Tudor Panţîru) for official commemoration and the laying of wreaths to honour the memory of Romanians from Besarabia and Bucovina. Each year, between 31st March and 2nd April, Societatea Română de Radiodifuziune, Societatea Română de Televiziune and Agenţia Naţională de Presă AGERPRES should broadcast programmes on the Soviet occupation in Northern Bucovina and Basarabia on a priority basis with mention of the terrible events at Fantana Alba. Excellent news! Today was April 1st 2013. Two years on. Unless there was a commemoration that was extremely private going on somewhere, I personally found nothing in the press and, as far as I know, there was nothing on TV or radio either. Doesn't sound very 'official' to me. So when? WHEN?!?