(Photo source) After a battle that has lasted nigh on three years between Bucharest City Hall who wanted to 'move' Matache Hall (Hala Matache) and NGOs trying to save it from demolition, oprescu's rats slunk out of their holes after dark last night (around 10pm, according to reports) and began to rip the roof off, shunning daylight like common thieves. There was no approved PUZ and therefore no legal demolition permit could possibly have existed at the time the so-called 'work' began and thus, once again, we are looking at the grossest and most illegal act of destruction to patrimony which was carried out on the very day the public debate to discuss urban plans for the neighbourhood and the future of Matache Hall was opened. If any authorisation was obtained, it was done in an emergency and, says Nicusor Dan, is illegal. He told EVZ that he would continue the fight in court. 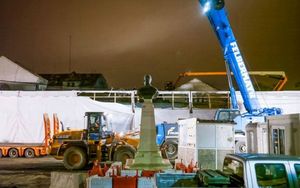 (Photo source) It isn't the first time we have seen this scoundrel oprescu sending in his demolition vermin in the middle of the night to escape journalists and the eyes of the general public, and it certainly won't be the last. What more evidence of bad faith does one need, for goodness sake. Clearly afraid of being blocked in court once again, oprescu proceeds exactly as he did back in February 2011 when he wiped out a whole street and several other historic monuments (the art-deco style Hotel Marna, the Nicolae Dobre House, the Constantin Radulescu House, The Dacia cinema...) without approval - once again in the early hours of the morning. Under the pretext of building a new avenue (diameter Buzeşti-Berzei), the megalomanically ambitious oprescu decided to decimate an entire neighbourhood, despite massive potential for urban regeneration. What happened last night to Matache was nothing less than an act parallel to mafiotic criminality.

Matache is (or was) a historic monument built in 1887. Since the hall came under ownership of City Hall, it has been devastated by iron thieves (encouraged by the afore-mentioned) although City Hall was supposed to be providing round the clock security to protect the building. The whole neighbourhood was kept in a state of underdevelopment and practically zero investment was made for infrastructure. Later on in the summer of 2011, having lost the case in court and also following protests by NGOs plus 120 of Romania's most known intellectuals at the previous frenzied destruction spree along with the shockingly speedy expulsion of more than 1,000 residents in the middle of winter, City Hall promised that Matache would not be relocated or demolished, but instead, would remain at its current location and restored. Associations and the Union of Architects proposed alternative plans to build the road whilst still preserving patrimony... "Today this promise has been broken," said Nicusor Dan. "The moving of a historic monument is illegal. It could only happen in the case of force majeure and not to construct a road." 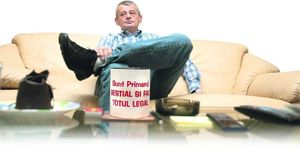 (Photo source) Does anyone expect anything better from the mayor of Bucharest whose big dream is to make the Guinness Book of Records for the world's longest sausage and whose achievements (the National Arena and the Basarab overpass) cost more than twice as much as similar projects abroad? He is a puppet for USL, a typical product of a national communist society and does not even know the meaning of the word 'culture'. In addition to all that, he is an absolute disaster for intelligent urban development.

What is interesting in this continuously outrageous tale of cultural massacre is that a code orange weather warning had been given a little earlier, thus further encouraging people to stay indoors. Was it declared as early as it was to help oprescu's minions 'perform' well away from prying eyes? oprescu certainly took precautions: code orange AND unsociable hours. And another question: why didn't he wait until the better weather? Last night, there were dozens of 'workers' on site beavering away in sub-zero temperatures, and this morning saw the site covered with a blanket of snow. Hardly the best working conditions. So WHY now when he could have delayed a few days? What's the rush? Is there a deadline no one knows about? 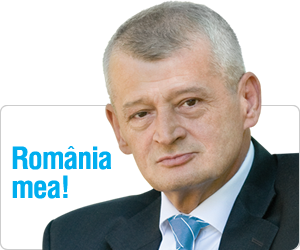 (Photo source) In addition, City Hall started to "dismantle" Matache without knowing exactly where they're going to put it and without a draft for ressemblement. The 'chief architect' (he does NOT deserve such a title) of the capital, George Patrascu said several weeks ago that he would organise an architectural competition to determine the position of the hall, but the contest has still not yet been done. Does it sound normal to you that a historic building one wants to protect and relocate would be demolished by bulldozers? Nope... What on earth can be salvaged after such humiliating and violent treatment?

Nicusor Dan said City Hall have not paid the slightest attention to Bucharesteans' repeated demands made at debates (organised by PMB) for the hall to remain on its current site . He was at 15 debates held on the subject, probably established because the law requires it, but what was said during them was not taken into any consideration whatsoever.

If the serial killer of culture, oprescu, wants to build something and there is a historic monument in the way, it gets whacked. We have seen it time and time again, and no matter how many times Nicusor Dan drags him through the courts, no matter how often he is found guilty of abuse of power or illegal demolition, it's all much of a muchness. He pays no attention and carries on with his determined hacking of Bucharest, finishing off what Ceausescu began, and nothing and nobody seems able to stop him. How I pray that karma really does exist... (Image source) The mystery is that it would be FAR cheaper to leave the hall where it is, restoring it with the attention it deserves than moving it. And in none of the debates was City Hall able to provide information on how to even move the hall nor how much should be saved for future restoration. Evidently, they have no intention of doing either. City Hall however says the contrary. They say moving the hall will be a million euros cheaper. Rather believe a holder with a REAL PhD in mathematics who devotes his existence to saving Bucharest than a bunch of hungry, ambitious scumbags sitting in cosy chairs at City Hall planning what to get rid of next. Demolish. Slash. Destroy. Maim. Deface. Scar. These are oprescu's by-words...

Please see HERE for a list of reasons (economic, judicial, administrative) as to why Matache Hall should NOT be relocated, as outlined by the Propatrimonio Foundation.

It appears that when up against the tsunami of oprescu and his real estate mafia, one cannot win, whether you are an NGO or Nicusor Dan with the law on your side. What does law have to do with it? Nothing. Laws are there, but not applied. And people like oprescu consider the law a waste of time in any case. Laws were not written for the supremely arrogant such as him. They were written for stupid folk like you and me. And if you try to make sure laws ARE applied, well, you get bulldozed.

For anyone out there (and there are many) who say "what's the problem? The place was a ruin anyway", well, they've kind of missed the point. You can't just demolish a building without proper legal approval because it's in your way. You cannot ride rough shod over the law when it suits you. And people who think it's alright to do so are as troglodytic as oprescu. How many just stood there and did nothing these last three years? How many locals attacked NGOs protesting against the demolition of a historic monument? And how many robbed and pillaged iron, wood, ceramic tiles from a building of patrimony? Answer me that. Once again, a people of such apathy, such pathetic indifference in the face of mass and wilful destruction of their own history is repugnant. Those who voted in oprescu at the last local elections are accessory to cultural genocide. Every single one of them. Without exception. A city gets what it deserves: the hideous monuments, the useless roads, the rubble and,of course, its officials. You who voted oprescu, I hope you're happy in your bubbles of nonchalence and irresponsibility. You deserve exactly what you elected.