Mogosoaia with an exceptional guide :o)

Mogosoaia with an exceptional guide :o) For this post, I am handing you over to my own marvellous personal guide, Silvia Colfescu, with whom I visited Mogosoaia on Tuesday. I have been there many times and thought I knew it well, but of course, I did not. With her anecdotes, stories and tales of the past, the bricks came to life, the arches became all the more romantic and the architecture all the more meaningful. To share what I have discovered with you, here are some excerpts from her marvellous (and frankly, incomparable) book "Bucharest Guide", also available in Romanian. I highly recommend it to anyone wishing to embrace the joys and sorrows of a marvellous city scarred by its past and threatened by the present but still, despite it all, with its own quiet, elegant loveliness just waiting to be unearthed - and deserving it fully. The photos here are mine, though the book is choc-a-bloc with superb images in both colour (English version) and black and white (Romanian version) that you'd regret missing.

My deepest thanks to Silvia both for our après-midi d'une faune and for this pearl of a book that I took with me everywhere and shall plug and plug until Vremea is out of stock!!

"Constantine Brancoveanu was one of the most tireless founders of monuments in Wallachia. Of the palaces built by the great voievode, Potlogi(40km from Bucharest) and Mogosoaia still 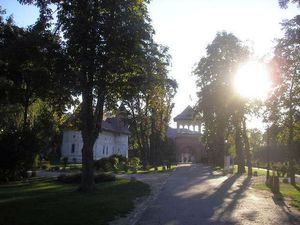 The best preserved of the Brancoveanu palaces, Mogosoaia, is situated to the north-west of the city on the banks of a lake with the same name. (...)

Constantine Brancoveanu bought the Mogosoaia estate in around 1680, as well as the buildings that stood there, as a retreat.

The first building the voievode constructed on the site was the church of St George in the Fields in 1688. Simple in plan, the square church has a porch with sturdy brick columns. It does not have a spire but, like other edifices built around this time, it has a small tower on the north side which houses a staircase to the belfry above the narthex.

The interior conserves the original murals (so sorry it was closed - Sarah's note), recently restored. In the narthex to the right of the door is a remarkable votive painting of the founder and his four sons whilst, on the left, Lady Maria and their seven daughters are depicted.

The date of construction, 1702, is inscribed upon the votive stone above the door of the palace porch where we can also learn that the palace was built from its foundations by the voievode and then donated to his son, Stefan. The princely Brancoveanu family lived here until 1714. In the April of that year, the lord, lady and their four sons were taken to Constantinople (by the Ottomans who hoped to locate the immense fortune he had 'supposedly' amassed - Sarah's note) where Constantine and his four sons were tortured and then beheaded.

One of Silvia's stories: the heads of Constantine Brancoveanu and his sons were paraded around the city on sticks and then thrown into the Bosphorus, lost forever, after the grizzly episode caused great unrest on the streets of Constantinople and a rebellion was feared. His resourceful wife, however, recuperated the body and managed to get it home to Bucharest where she had her husband buried in Sf Gheorghe in a nameless tomb. Above it, she placed a beautifully intricate crafted candle-holder upon which she hid an engraved message - here lay Constantine Brancoveanu and her wish - to be laid to rest by his side. For several hundred years, the message remained unread and the tomb unmarked until one day, somebody decided to clean the candle-holder. Constantine Brancoveanu's tomb was named at last - and his wife was indeed buried by her husband's side - Sarah's note.

The palace, which remained empty, was looted. A French traveller who stayed there in October 1714 after the building had been converted into an inn noted that the interior had beautiful vaulted ceilings and paintings, but that nothing remained of the royal furniture. After several decades, the palace was abandoned. The Russo-Turkish War (1769-74) caused yet more damage.

The last scion of the male Brancoveanu line, the prince's grandson, set little store on his glorious ancestry allowing the demolition of a vaulted ceiling in one of the rooms despite murals depicting his descendants. On the death of the last Brancoveanu, the palace past into the hands of the Bibescu family.

Prince Gheorghe Bibescu was married to Zoe Mavrocordat, the adopted daughter of the last Brancoveanu (the same Zoe whose statue one can visit at the Domnita Balasa church - Sarah's note). Members of the Bibescu family lived here until after World War II. Gheorghe Bibescu was the first to restore the palace, followed, after 1860, by his son Nicolae.

A French architect repaired the north facade and added four columns brought from Potlogi. He altered the windows, replaced the arch in the middle with three lobed arches and extended the entire building upwards. Sarah's note), had the palace restored.

Another Silvia story: Marthe Bibescu loved irises. You can see a marvellous carpet of them which, I was told, is absolutely wonderful in spring - Sarah's note

Venetian architect Domenico Rupolo and Romanian architect G.M. Cantacuzino decided to replace the plasterwork of the exterior walls, exposing the decorative brickwork whose time-weathered hue contrasted with the grey of the stone mouldings (see photo at the opening of this post - Sarah's note).

After World War II, the palace became the property of the state. For a while, it housed a section of the Art Museum and exhibited medieval decorative art.

The earthquake of 1977 damaged the building yet further. Chimneys collapsed and cracks appeared in the walls. The palace was then closed.

A few years later,  it was fitted with ugly factory chimneys, now vanished. In the building on the left of the entrance tower was, for many years, the residence of the Writers' Union.

After 1989, the palace lay deserted for a time. More recently, the Brancoveanu Palace at the Gates of Bucharest Cultural Centre has established itself here.

A princely residence, the Mogosoaia Palace like the others built by Brancoveanu stood on the shores of a lake with one side facing the water and the other with a monumental belvedere (Romanian: foisor) facing the courtyard. All the Brancoveanu palaces share a number of common features: harmonious proportions; architecture that employs Renaissance features (loggias); sumptious sculpted decor with stone columns and balustrades richly ornamented with floral and animal motifs.

The main part of the palace is the upper floor made up of reception and living rooms. Access used to be via the monumental exterior staircase with its fret-worked stone balustrade leading to the foisor. It still preserves the original wall paintings with tiny floral motifs. In time, the palace was fitted with two interior staircases.

The rooms, originally decorated with oriental-style stucco-work and paintings reminiscent of Persian miniatures (the same type of decor can also be found at Potlogi and the Fundenii Doamnei Church), have vaulted ceilings. The carved stone consoles contrast with the immaculately white walls. During the interbellum period, the upper floor was adorned with beautiful guilded mozaics and marble floors. Facing the lake is a loggia, a space that forms an organic transition from interior to exterior. Its plan matches that of other rooms, but the exterior walls consist of a carved stone balustrade and fluted columns with capitals and bases adorned with sculptures.

On the right of the entrance tower, the kitchens with their vaulted ceilings supported by trumpets and brick columns have been wonderfully preserved.

The palace is surrounded by a park where, in a monumental crypt, the members of the Bibescu family lay peacefully.

On the right of the palace, precariously sheltered by a make-shift roof, the remains of the sculptures salvaged from the criminal demolition of the Vacaresti Monastery in 1985 have been stored." 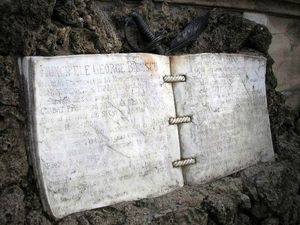