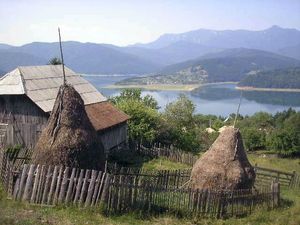 The Izvorul Muntelui barrier lake (35 km/33sqm), or Bicaz Lake, is Romania's largest artificial lake situated on the higher course of the Bistrita river in Neamt county. It was formed as a result of the Bicaz hydro-energetic dam (127m high) and for its construction (with the plans of the well-known engineer Dimitrie Leonida) to get underway, more than 170,000m3 had to be excavated. It is used to generate hydroelectricity to the Bicaz Stejaru hydro-plant.

Before the construction of the dam (1950–1980), originally named the Vladimir Ilich Lenin Dam, the settlement was just a mountain village where the main economic activity was timber harvesting. Building costs hit almost 1.7 billion lei and caused the loss of hundreds (or probably thousands) of lives. Many political prisoners worked there under forced labour in brigades, most of them specialists in the field, military men and brigadiers. According to THIS site, those working in forced labour camps were "rich peasants (so called "chiaburi"), merchants sentenced for profiteering, former members of the Romanian right wing parties (known as "legionnaires") or of former non-communist political parties, relatives of "traitors of the motherland" (persons who had left Romania and settled abroad), peasants who opposed the process of collectivisation of agriculture and other opponents of the regime. Another form of forced labour was the military of the "Labour Service" (Romanian: Serviciul Muncii , created by Government Decree Nr. 2 in January 14, 1950). This service enrolled young men who were of age for conscription in the mandatory military service but, for political reasons, were not deemed reliable and therefore considered unfit for military training. From 1950 to 1959, a unit of 1,200 military enrolled in the Labour Service were active in the construction of the dam and the hydroelectric plant."

Furthermore, to accomplish this project, around twenty villages were also displaced. Two of them, Rapciunita and Carnei, were wiped entirely off the map. More than 18,000 inhabitants from around 2,300 homes were moved.... The conditions were so harsh for prisoners that few survived more than a couple of years. The regime succeeded in obtaining two goals at Bicaz - the dam, and the killing off of thousands of "dusman al poporului"... So many other examples of mass destruction and huge loss of lives through forced labour under the regime come to mind: Baragan, Transfagarasan, the Black Sea Canal - along with the terrible tragedy of Ada-Kaleh. Please see Barajul de la Bicaz – realizari si suferinta for videos.

Members of the Neamţ County Chapter of the Association of Former Political Detainees erected a cross near the dam in memory of those who lost their lives during detention through horrors that most of us can't even begin to fathom. Like the stunning Transfagarasan Pass, it is almost impossible to equate such appalling suffrance to a place so overwhelmingly beautiful.