(Image source) The recent news concerning actor Serban Ionescu who contracted Lyme disease after a tick bite last summer, Romanian medics' questionable understanding regarding the disease and the misguiding and sometimes completely inaccurate articles found in the Romanian press such as THIS just lately, all prompt this post. It is IMPERATIVE that Lyme disease is understood if it is to be avoided and/or treated correctly and efficiently. Rumours that it can be transmitted from person to person for example and that 80% of the Romanian population are possibly infected are completely FALSE, reeking of ignorance and panic-mongering. The tick should NOT be covered with lard to smother it. What a load of rubbish! And Lyme was NOT 'imported' from the USA and neither is it a fatal disease. It is completely treatable. There is NO NEED for people to die of Lyme in 2012.

It may be perfectly true that Lyme disease is 'new' to Romania and hence doctors are not as on the ball as they may be elsewhere. However, Lyme disease is THE most common tick-borne illness in Europe and North America. It was discovered more than twenty years ago and has certainly been on Romanian territory for just as long. Just because it failed to be diagnosed does NOT mean that it didn't exist. I therefore cannot find an excuse for ignorance on the part of doctors and medical staff throughout the country.

I beg you to read the following information carefully and then share it throughout the social networks whether by e-mail or FB. 'Forearmed is forewarned', after all. Perhaps together we can help dispel some of the absurd and uneducated rumours and fears flying around. If you know what causes it, the symptoms it gives, the risk factors and the treatment you ought to receive should you ever suspect you have Lyme disease, you are in control of your body, the care that should be given and the outcome.

All information below is linked to bona fide medical sources so that you can research further if you wish. Further reading in Romanian and a bibliography of references follows the text.

Lyme disease is caused by the bacterium Borrelia burgdorferi. Deer ticks, which feed on the blood of animals and humans, can harbour the bacteria and spread it when feeding. If you're treated with appropriate antibiotics in the early stages of the disease, you're likely to recover completely. In later stages, response to treatment may be slower, but the majority of people with Lyme disease recover completely with appropriate treatment. 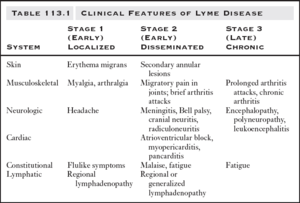 There are 3 stages of Lyme disease.

The Lyme disease bacterium is carried primarily by deer ticks. The ticks are brown and often no bigger than the head of the pin, which can make them nearly impossible to spot. Deer ticks typically feed on the blood of mice, small birds and deer, but they can also feed on the blood of humans, cats, dogs and horses. They live in low bushes and tall grasses of wooded areas, waiting for warm-blooded animals to pass by. Deer ticks are most active in the summer.

To contract Lyme disease, you must be bitten by an infected deer tick. The bacteria enter your skin through the bite and eventually make their way into your bloodstream. Before bacteria can be transmitted, a deer tick must take a blood meal, which can take more than 48 hours of feeding. Only ticks that are attached to your skin and are feeding can transmit the bacteria. An attached tick that has a swollen appearance may indicate that enough time has elapsed to transmit bacteria. Removing the tick as soon as possible may prevent infection.

Left untreated, Lyme disease can cause:

Other tests that may be done, when the infection has become more widespread, include:

Oral antibiotics
Oral antibiotics are the standard treatment for early-stage Lyme disease. These usually include doxycycline for adults and children older than 8, or amoxicillin or cefuroxime for adults, younger children, and pregnant or breast-feeding women. These drugs often clear the infection and prevent complications. A 14- to 21-day course of antibiotics is usually recommended, but some studies suggest that courses lasting 10 to 14 days are equally effective. Patients allergic to penicillin are given erythromycin or related antibiotics.

Intravenous antibiotics
If the disease has progressed, your doctor may recommend treatment with an intravenous antibiotic for 14 to 28 days. This is effective in eliminating infection, although it may take some time to recover symptomatically. Intravenous antibiotics can cause various side effects, including a lower white blood cell count, mild to severe diarrhea, or colonisation or infection with other antibiotic-resistant organisms unrelated to Lyme.

Following treatment for Lyme disease, some people still have persistent fatigue and achiness. This general malaise can take months to slowly disappear, although it generally does so spontaneously without the use of additional antibiotic therapy. There is no evidence that the Borrelia infection causes chronic fatigue syndrome or fibromyalgia. Although some patients with Lyme disease may develop these problems, as with other patients who get chronic fatigue or fibromyalgia, long-term antibiotics will not hasten recovery.

Pain medications, such as ibuprofen, are sometimes prescribed to relieve joint stiffness.

IMPORTANT NOTE: In the first few weeks following infection (when the rash first appears), antibody tests are not reliable because a patient's immune system has not produced enough antibodies to be detected. Antibiotics given to a patient early during infection may also prevent antibodies from reaching detectable levels, even though the Lyme disease bacterium is the cause of the patient's symptoms.

You can decrease your risk of getting Lyme disease with some simple precautions:

Avoid Bismacine
The Food and Drug Administration (FDA) warns consumers and health care providers to avoid Bismacine, an injectable compound prescribed by some alternative medicine practitioners to treat Lyme disease. Bismacine, also known as Chromacine, contains high levels of the metal bismuth. Although bismuth is safely used in some oral medications for digestive conditions, it's not approved for use in injectable form or as a treatment for Lyme disease. Bismacine can cause bismuth poisoning, which may lead to heart and kidney failure.

Is There a Vaccine for Lyme Disease?

In 1998, the FDA approved a vaccine for Lyme disease called LYMErix. Although some people reported becoming ill from the vaccine, the FDA found no evidence that it was dangerous. However, in February 2002, the makers of the vaccine pulled it off the market due to poor sales. Currently, there is no available vaccine on the market for Lyme disease.