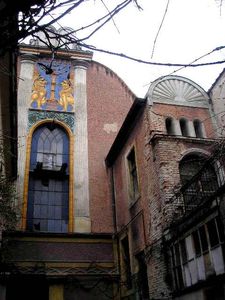 Anyone passing through the Schei Gate of Brasov can stop to admire the impressive synagogue on Str Poarta Schei, 29, but only a few know about a gem - Sinagoga Albastra - hidden in a courtyard at str Castelului, 64 built by the orthodox jews of the city early on in the 20th century. Today, it stands alone and horribly neglected, window panes broken, paint chipped and washed away by years of inattention, rusted fencing and rotting woodwork - and only those who love history enough to bother, I'm told, pass through the heavy wooden door in the street to pay it a visit...

The first members of the jewish community settled in Brasov in 1807. Little by little, their numbers grew until, in 1940, there were around 6,000. After World War II, there remained only 200. It is automatic, perhaps, to imagine they fell vitim to the horrific deportations and what followed, but actually, most of the jewish community emigrated to Israel and the US. As far as I know and from what many tell me, there were no deportations in nor from Brasov.

Back in 1877, the community divided itself into two - traditional orthodox and neologist, building their own place of worship. The neologist synagogue on str Poarta Schei was inaugurated in 1901. Built in gothic and mauresque style with a basilica layout of three naves, it was registered on the list of historic monuments of national interest.

On strada Castelului, 64,  one finds a house which, though lovely, in no way prepares you for what you will find once inside the courtyard. An architectural beauty, the Sinogoga Albastra is today in grave danger. Built in 1924, it was

the place of worship for the orthodox jews of Brasov. The outer walls are covered in stunning blue faïence and in the middle, a magnificent gold hannukiah. This once-stunning monument can no longer be visited. It is all locked up and a danger zone. To get in to the courtyard,

one should take pot luck and ring on the doorbells until someone answers, kindly letting you in - tell them you want to admire the synagogue and they will surely oblige.

The courtyard itself is also a jewel. One needs very little imagination to see how lovely it once was. Dead branches of wisteria and honeysuckle climb the walls and drape themselves elegantly

(yes, even now) from one corner to another. Although the abodes are old and in dire need of attention, they, too, have an air of great nostalgia and a certain pride.

The synagogue stands at the end, taking your breath away as you walk in. The blue faîence is as bright as ever although no one has done anything to encourage it, and the hannukiah gives a tremendous sense of peace. On either side of the hannukiah are two lions - or perhaps they are sphynx. In any case, they are most majestic and defend the hannukiah with evident defiance.

I do not know who owns this wonderful monument, nor who is responsible for its demise. It was suggested that it belonged to the orthodox jewish community (which would make sense since they built it and worshipped there). Now there are none in Brasov, it has thus fallen to rack and ruin. If this is indeed the case, I suppose it is now the property of the state that would account for its sorry state. However, I have never heard of any jewish community (whether orthodox or neologic) who would allow such a humiliating thing to happen to one of their places of worship. And so, what is the story of the Sinagoga Albastra and how long has it stood in such a condition? Are there any plans for it?

The very fact that it is little known and hidden from the eye of the average passer-by means that no noise has been made to defend and save the Sinagoga Albastra. If no one knows it is there and those that do are too few (or don't care) then it's hardly a surprise there has been nothing in the press, nothing on the television and none of the NGOs have taken up the cause... A true tragedy.

One thing is for sure: however abused it may be, it remains a stunning jewel in the crown of the beautiful city of Brasov. Just when I think I cannot possibly find anything more awe-inspiring than the sights I have already seen, another one appears. The Sinagoga Albastra is certainly one of the loveliest - and one of the very saddest.